Here are the official 2019 New Era NFL Draft caps that players will wear on stage.

This year, all designs incorporate either state or city flag elements.

(The #Jets will release theirs on Thursday with their new uniform reveal) pic.twitter.com/0WMjiDYf94

Good lord, these hats are hideous.

Every year at the NFL draft, an event exciting to the biggest football nerds among us and nothing more than a conference call to everyone else, the draftees in attendance walk up on stage when their name is called, where they are promptly given a No. 1 jersey and a hat from the team that drafted them. It’s hokey but it’s a fun moment for the players.

The style changes every year, because NFL merchandising never sleeps. Last year’s hats were not great. They were boring and featured most cringey phrases written on them. That being said, it was still a major step up from the dreck being released this year.

According to Ryan DiNunzio of New Era, per Sports Illustrated, the designs this year were meant to promote the communities the teams play in.

“This idea as we go through to celebrate the past of the NFL and innovation of where it’s moving, we really wanted to start with where the game began within each local community,” Ryan DiNunzio, New Era’s director of football, says. “It’s a unique way to say this is where we started, this is who we are, this is what we’re about, this is the community we represent.

Sometimes, as a populace, we get too worked up over things that don’t matter. The hats that are given out at the NFL draft certainly fall into that category. There isn’t a lot you can constructively say about something that matters so little in the grand scheme of life. But these are so hideous that they actually deserve our time to break them all down.

Let’s examine these hats and just what, exactly, the designers are trying to do. Remember: Just because you can do something doesn’t mean you should.

The “Graphic design is my passion” collection https://t.co/PHtQ485Da3

This is a monstrosity. The goal was to incorporate the whole City of Fountains thing, and while the design itself isn’t terrible, it looks terrible being jammed onto the front plate of this hat under the logo. This is one of the worst of the bunch, which is saying something. Imagine being drafted by the Super Bowl favorites, excited that you get to play on the same team as Patrick Mahomes, and you have to wear this. Tough scene all around.

The Chargers probably have one of the better hats in the group. It’s not the most aesthetically pleasing look, with the white brim and jagged white edges not exactly matching up at the bottom of the crown. At least there’s nothing messy under the classic bolt logo, and the light blue is still a sweet color.

America’s team, the Oakland Raiders. So much for trying to incorporate the city or state flag into this one. This is honest a decent hat, especially compared to the rest of the crop this year, but it’s sort of out of place. For all we know, the hat may have been designed before the Raiders signed their new lease in Oakland and were temporarily homeless. It’s out of place but acceptable enough. 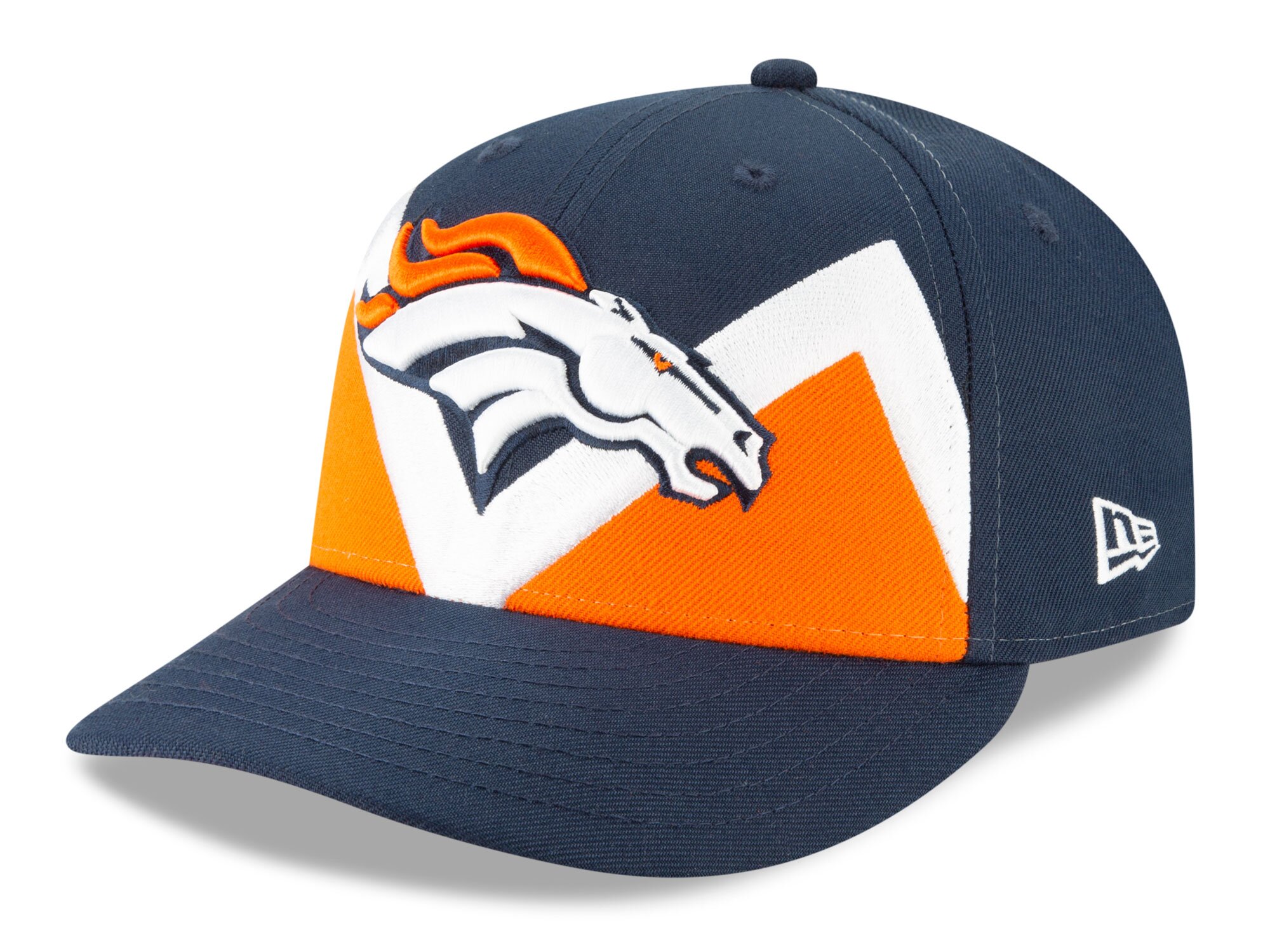 The Denver city flag is actually fairly cool, and the designers did it some justice here. But it’s just not a very good look on a hat. This is the kind of thing that you make into a flag that you buy on the NFL Shop because you can say look, it’s our one thing with our other thing and it’s palatable as a tchotchke in your man cave. This isn’t a great thing to wear on your head, though.

I get that the flag is representative of Indianapolis’ Monument Circle, but this design essentially puts the Colts logo in the crosshairs. It’s a weird look.

The state flag of Texas is one of the more recognizable ones, and you can see what they were trying to do here. It doesn’t look good, though. I get that they’re trying to be unique and creative, but a multicolored bill split in the middle looks terrible, flag be damned.

The zebra-print sun burst emanating from the Jaguar’s head is some kind of look. A really bad look, to be specific. 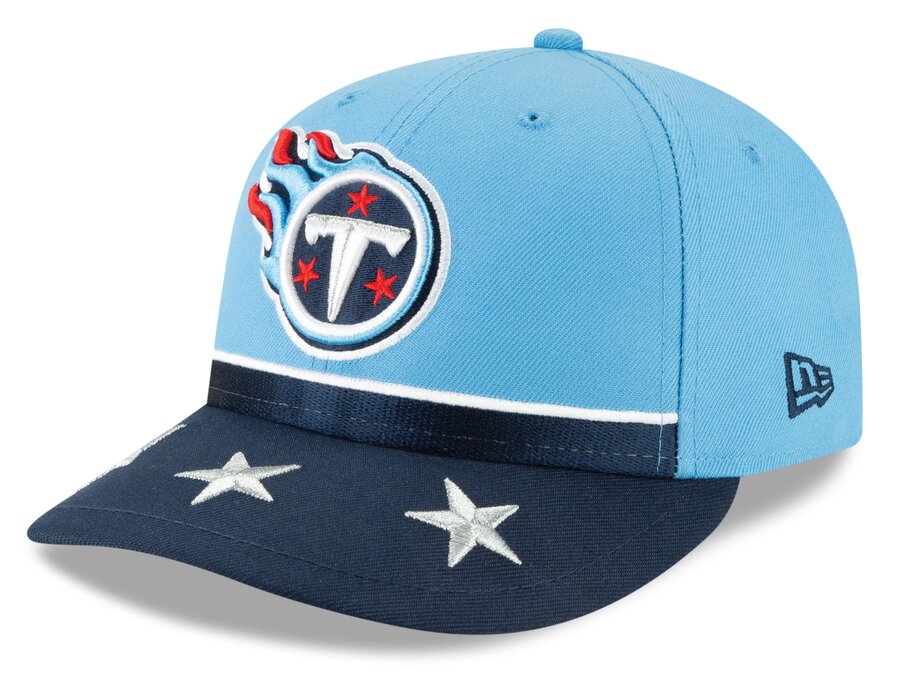 Not awful. In fact, this is easily one of the best. The concept is simple, the logo is still the focal point and the color scheme is solid. Good to see the Titans be remarkable for once.

Throw this one out, this is terrible. I don’t care what the Pittsburgh coat of arms is, it doesn’t belong on a hat. A bright yellow solid stripe intersecting perpendicularly with a checkered stripe? Nobody should ever put this on their head. It’s a weird look that would offend me if I saw it coming toward me.

The Ravens are near the top of the list for the best hat because the entire front is left undamaged. The purple action all over the side looks weird and without context it looks like a manufacturing error, but it’s harmless enough. Unsurprisingly, the best hats are the ones that have been left alone the most. 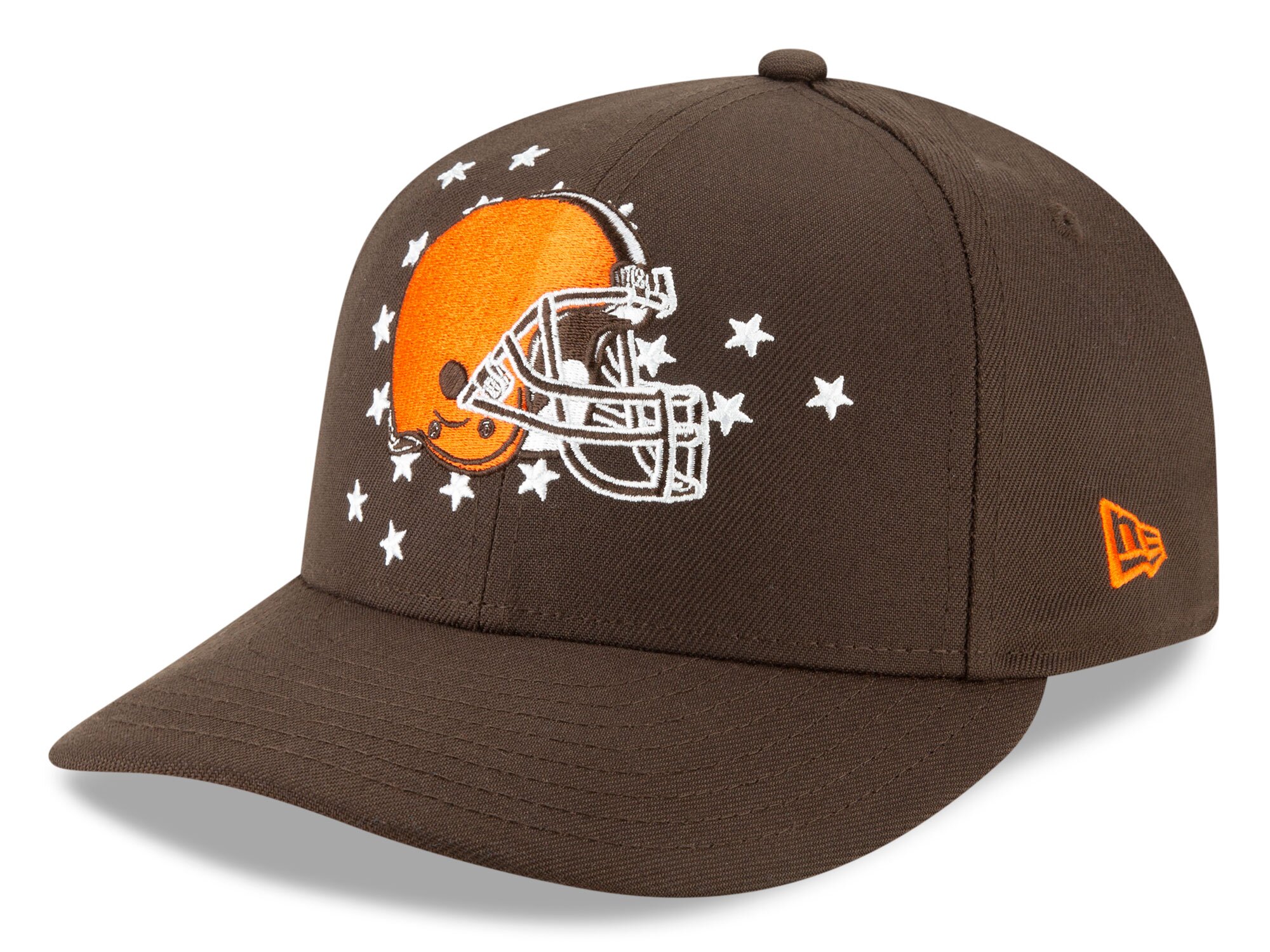 This one just looks messy. If you know about the non-rectangular Ohio flag I suppose it makes sense, but it’s not exactly an easy one to look at. At least the rest of the hat is left untainted by unappealing patterns and designs. 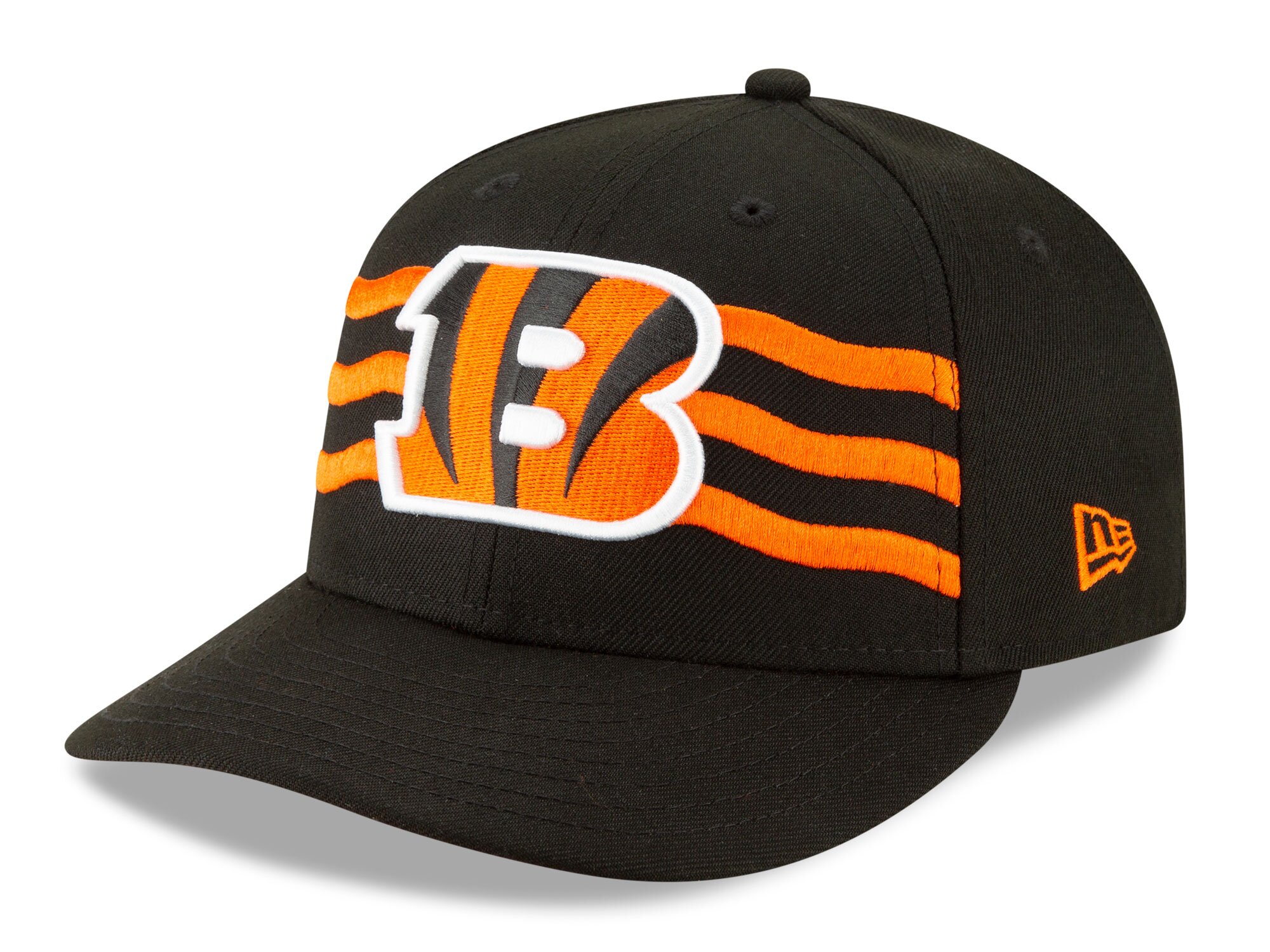 Apparently the wavy lines represent the Ohio River, which feels like a stretch but that’s fine. It’s a simple enough design and meshes well with the logo, with no other disasters on the hat anywhere. You can actually picture a normal person wearing this hat, which helps its standing.

It’s actually surprising this wasn’t a design already available for purchase, it seems like a pretty standard, run-of-the-mill design. Not a whole lot to complain about here, although it’s hard to imagine a ton of people buying it who don’t live near Foxborough.

I can’t tell if I love or hate this one. Miami’s color scheme is one of the best, and it’s used well here. The palms on their own seems subtle enough, but when you factor in the logo, striping and two uses of the palm tree the front panel starts to feel kind of busy. Not the kind of hat you can get everyday use out of.

I bet you this hat will do a killing in the kids section at Lids.

The Jets are doing a full new uniform reveal soon, so their draft hat will be released along with the reveal. A request to the Jets design team: If the hat is bad, just scrap it altogether and pretend you never had one in the works.

Just like New England’s design, it’s hard to believe this hat hasn’t already been for sale in the team shop (although I imagine a bunch of similar ones are). The phrase “We Are 12” is still one of the funniest self owns in the NFL, but this hat is harmless enough. Another one that a typical fan could be seen wearing.

This is my personal favorite. The California flag is arguably the best in the Union, and the 49ers do a great job here of using the flag’s text style and the iconic star. This hat is legitimately good.

The NFC West can claim the best division of hats in the league overall. Arizona’s state flag is one of the best, and they do a really good job with it here. It’s a simple enough concept, the bird is still the focal point and the colors aren’t horrifically distracting. The bar is extremely low, but the Cardinals did a good job here.

This is another one that’s just too busy. The design and concept aren’t too bad in theory, but in practice there’s just too much going on here.A saving grace is that the Falcons have a common and easy-to-use color scheme. There’s a lot going on right in the front, though.

The New Orleans city flag features three fleurs-de-lis so this was a pretty easy one to draw up. I personally don’t love the look but in the city of New Orleans itself it could be a big hit.

Kill it with fire. This is an abomination. You can easily see what they were trying to do here, but it looks awful. Off-center logo, the black on top of the white looks weird, it’s just a disaster all the way around. The South Carolina flag rules, while the North Carolina flag is somewhat unremarkable, and somehow the Panthers combined both to make a terrible looking hat.

Tampa’s flag is a mess, so the Bucs actually deserve some credit for not making this hat into an ungodly beast. That said, the brim is so bad that it’s hard to be too favorable about this hat. Still, the traditional crown being kept intact is a good thing. 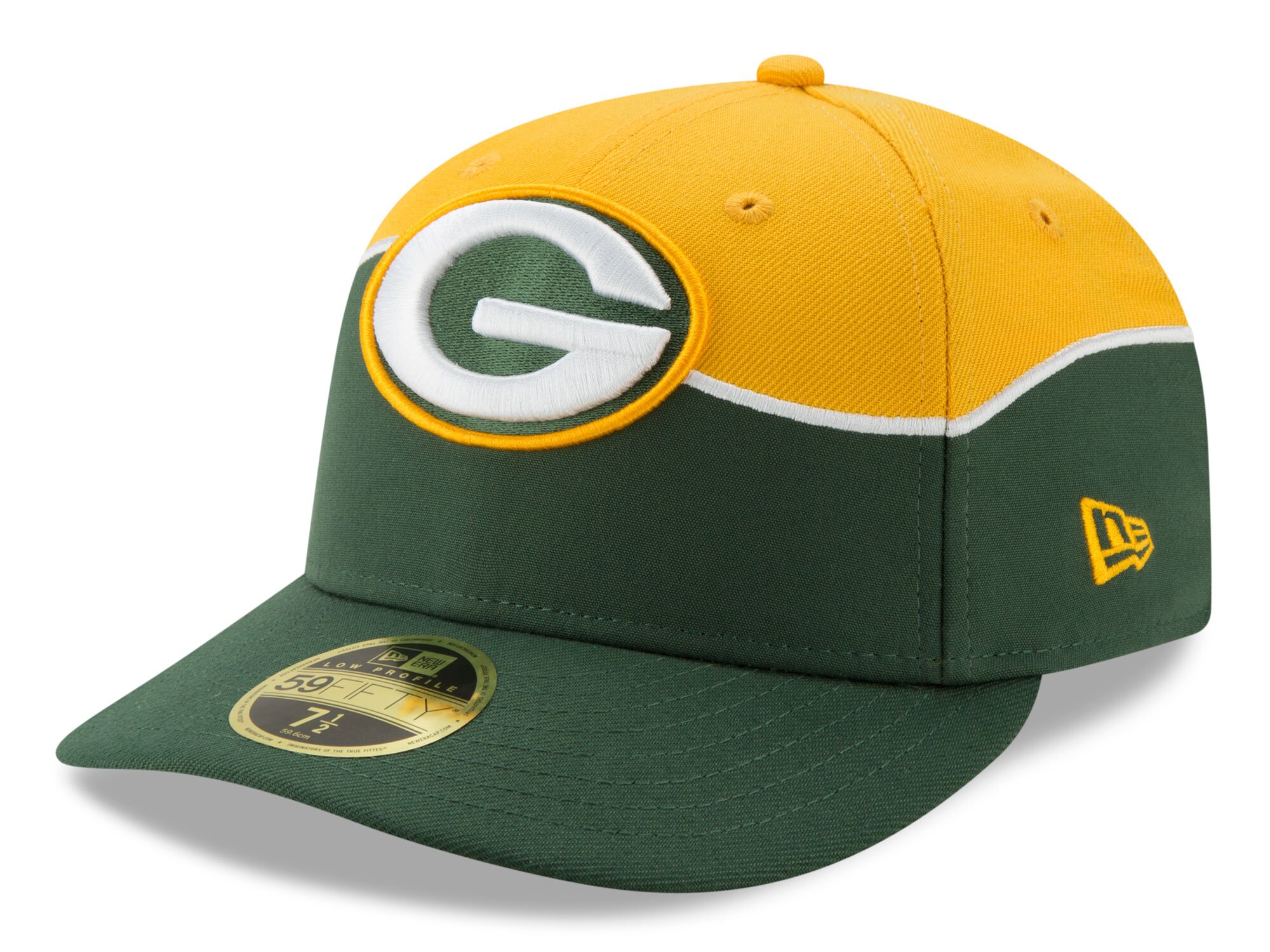 “It could be worse” is about as nice as I can be here. Another prime example of why you don’t need to do something just because you can. The Green Bay city flag, whatever. The hat sucks and the colors are lopsided. It’s just an awkward look that won’t look normal on someone’s head. 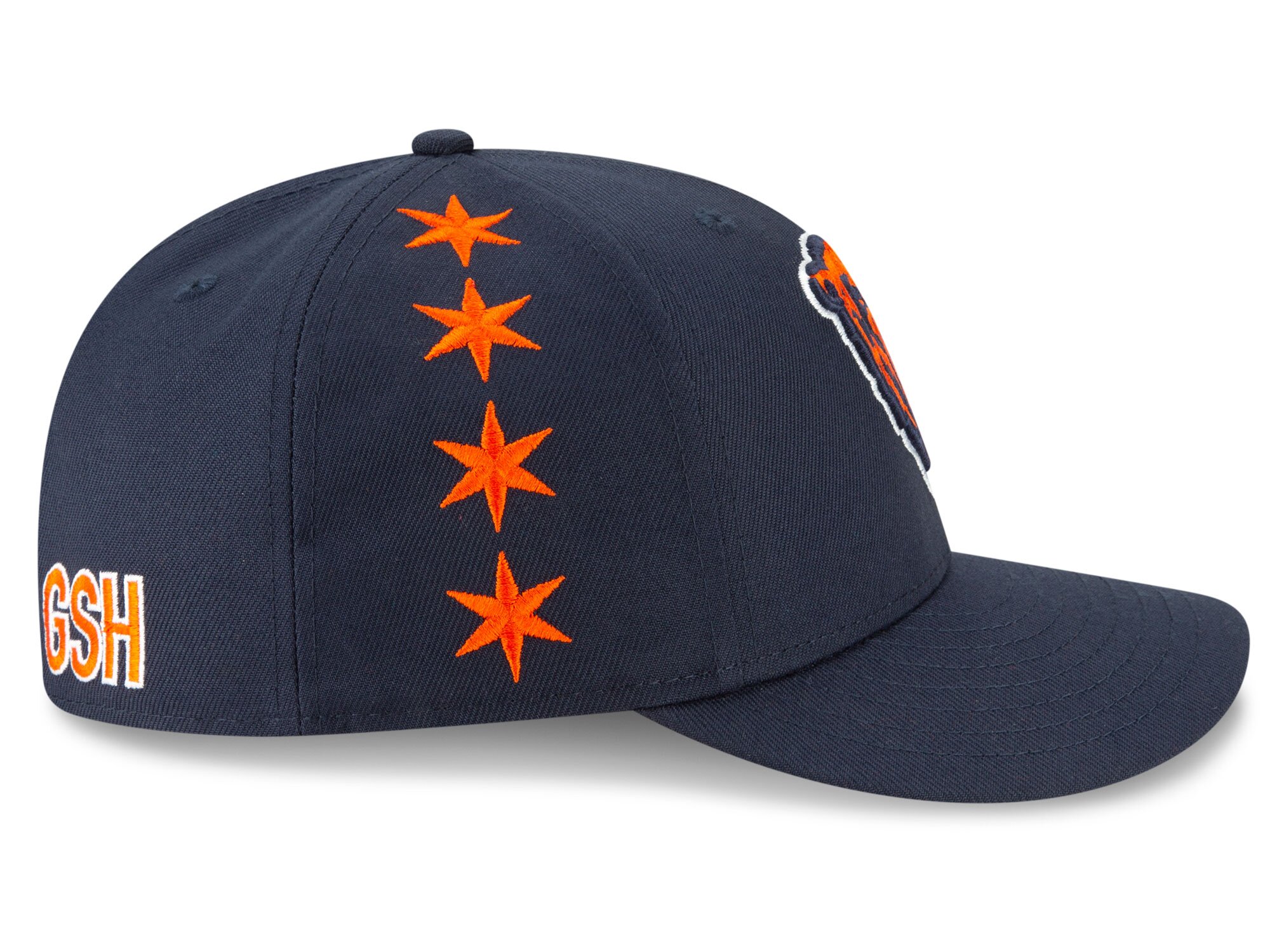 We have to use an alternate angle of the Bears hat to show you the unique element, which isn’t bad (also GSH, for George S. Halas, is on all Bears apparel, in case you didn’t know). The Chicago flag rules and this is a fairly subtle addition, at least compared to the other hats. Plus the front panel is traditional. TThe Bears are in the top tier for draft hats this year.

Minnesota’s hat is in the same vein as Tampa Bay’s, Buffalo’s and Tennessee’s in that the additional design is all on the brim. It’s low key enough that you could wear this hat in public and not look like a total buffoon, but there is a lot of action on the bill. 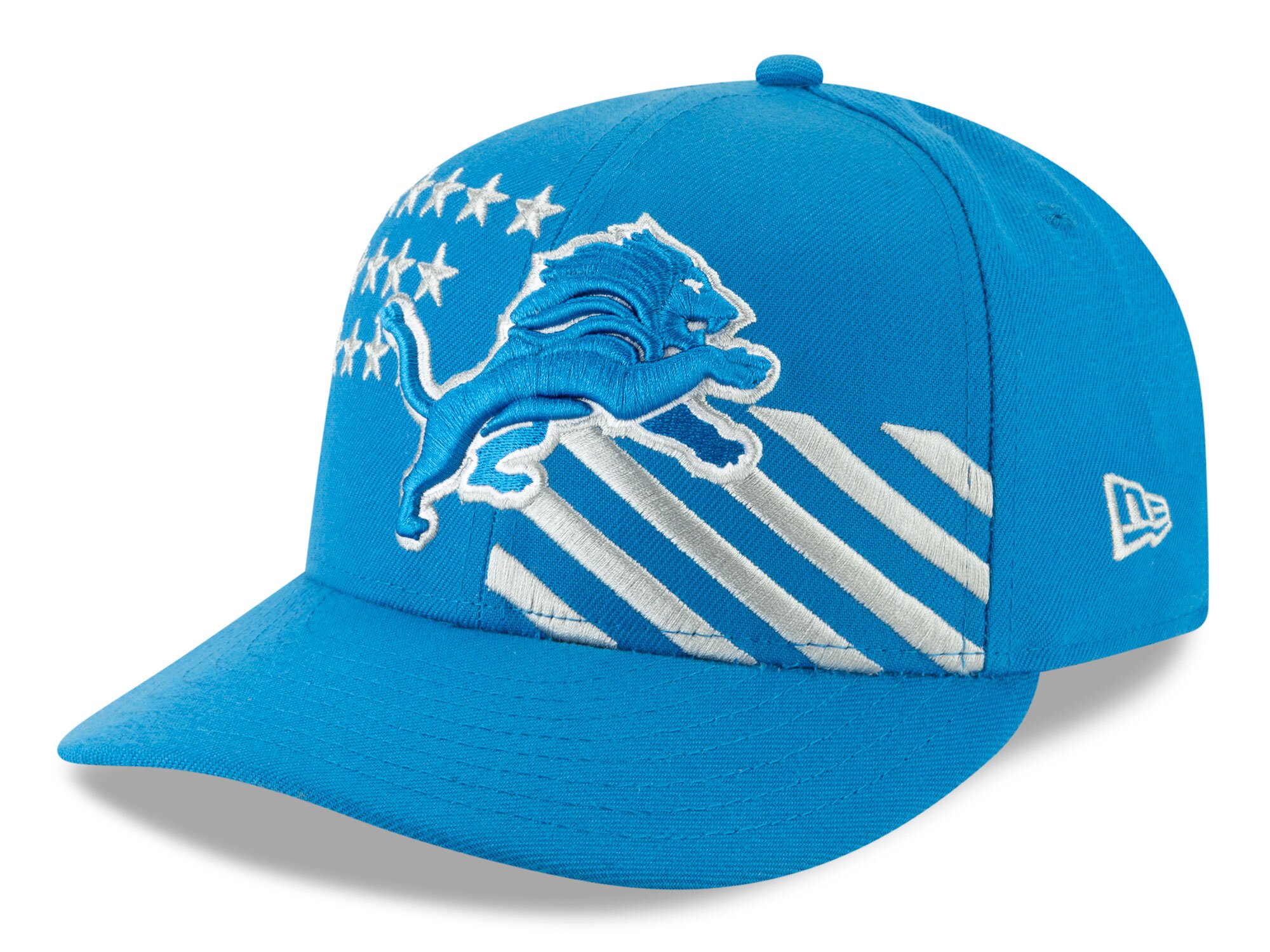 This is the exact hat that people who think Matthew Stafford is an above-average quarterback deserve.

Absolutely not. The band all the way around is too thick, and mixed with the multicolored panels it’s a cumulatively bad look. The late-career Eli Manning of hats. The Dave Gettleman as a general manager in 2019 of hats. Very bad. 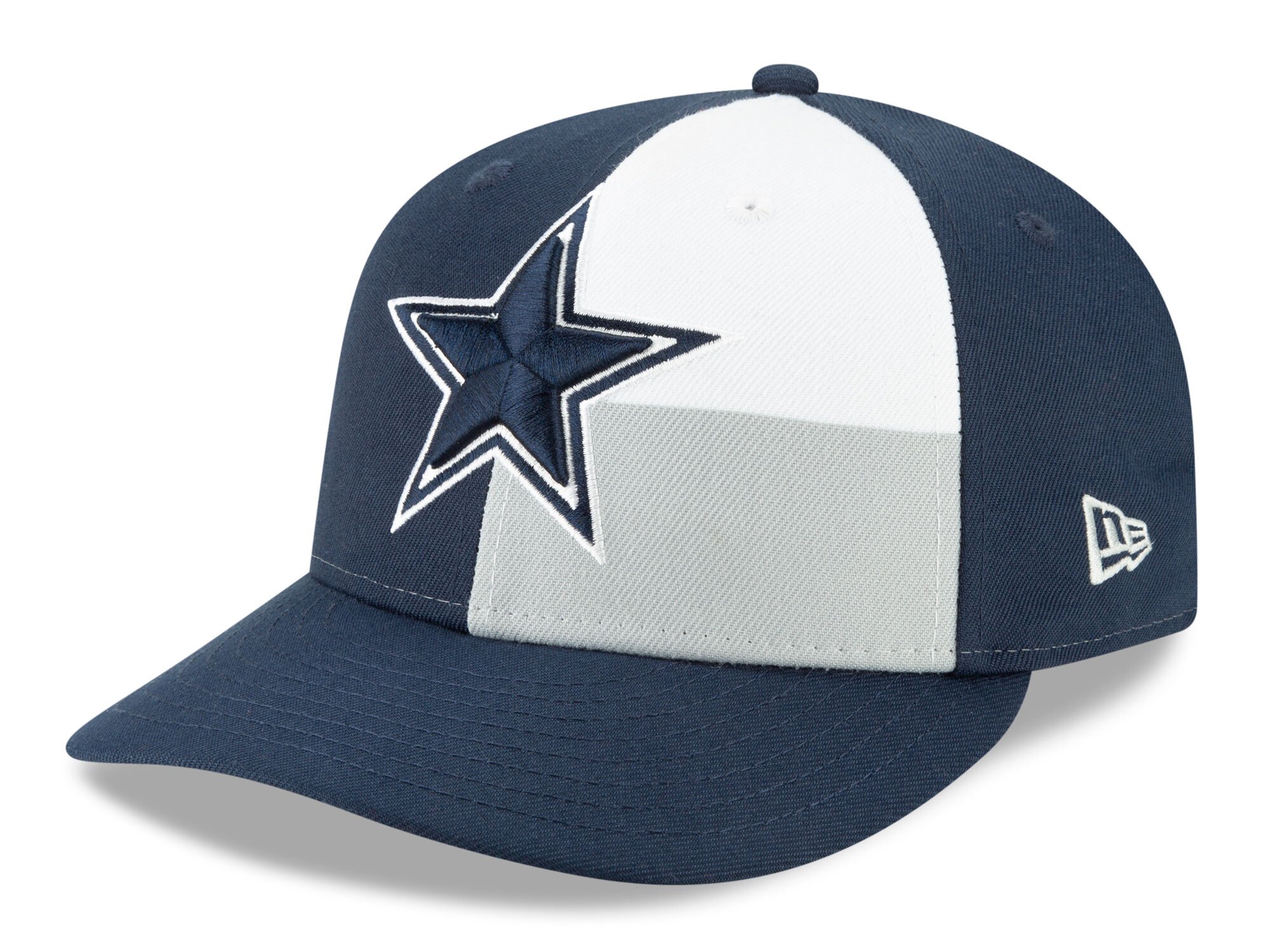 The Cowboys have a similar style choice as the Texans (and it’s an easy one) going with the Texas state flag, but unlike Houston’s this one doesn’t defile the brim in order to get the point across. The uneven mulicoloring still isn’t particularly pleasant to look at, but this is a much better layout than Houston’s.

Keeping all of the additional design on the brim is better than defiling the entire hat. However, I couldn’t care less that it’s on the city’s shield, the design here makes this look like an Ed Hardy hat and it’s terrible. 2002 called and it wants it’s terrible and inexplicable fashion trend back.

Finishing this with one of the better looking ones of the group, Washington’s can easily pass as a regular team hat. The flag is basic enough and fits in comfortably behind the logo. The bill is clean, the design is simple and there isn’t any ugly excess on the side. The Redskins enter the elite group of hats for this year’s draft that aren’t an affront to society.